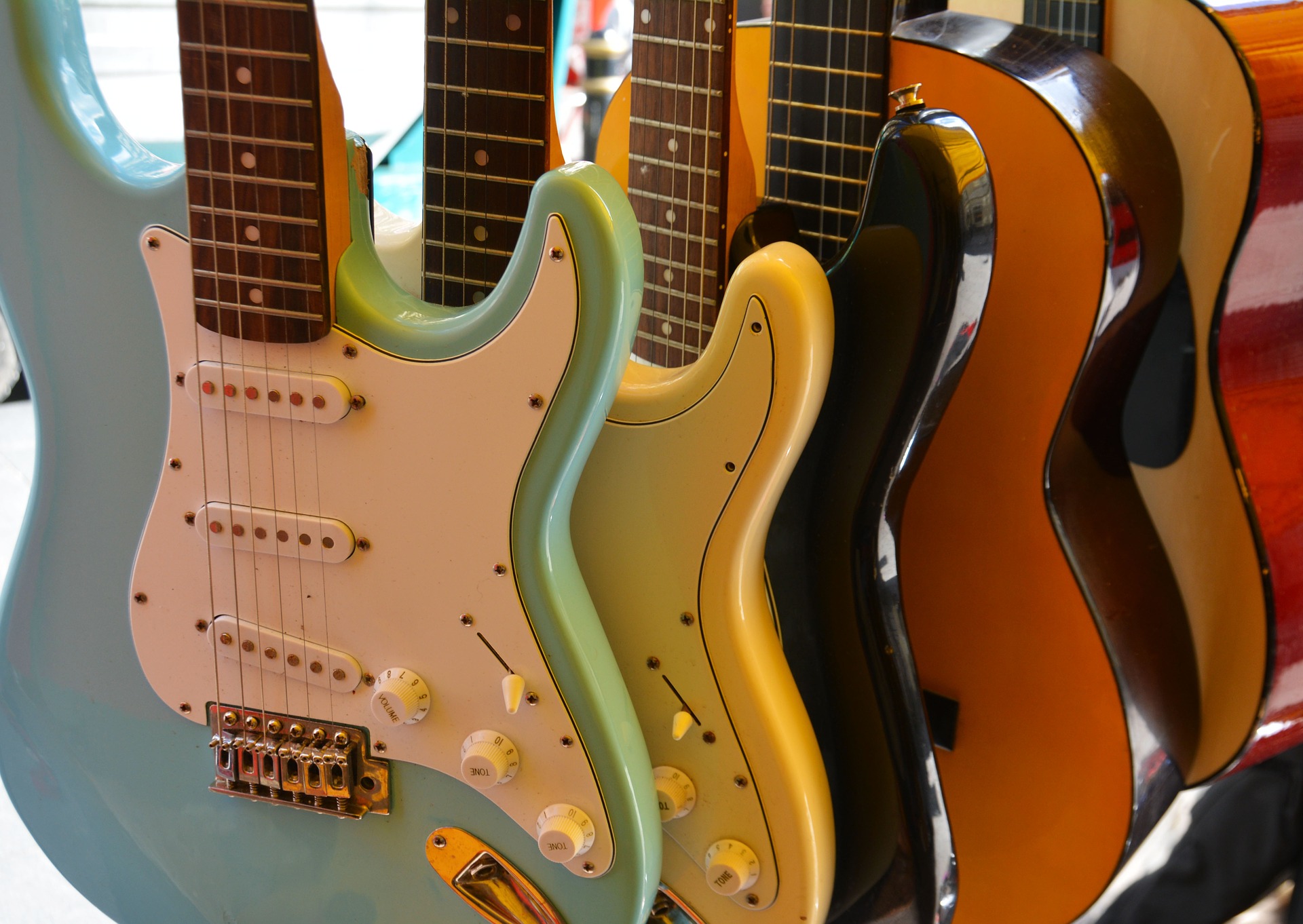 A guitar is one of the fretted musical instruments that usually has six strings. It’s played with both hands plucking or strumming the strings with fingernails, or a guitar pick while fretting simultaneously. The vibrating sounds of the guitar are released when playing, and the tone determined by many external factors.

Different guitar shapes produce different sounds; this is a vital feature to keep in mind when handling a guitar. In addition to the sound aspect, guitars also have different sizes, and shapes of acoustic cavities in the guitar shape lead to different tonal characteristics.

The guitar sound is mostly affected by its external features; how you play the guitar doesn’t mainly contribute to the tone and vibrations released. A guitar may seem very simple, but the make is extremely sensitive and requires sharp detail.

Learning how to play the guitar is quite easy compared to most fretted musical instruments; it is one of the flexible tools one can learn and adapt to within a short period. The guitar was invented in the 16th century, and massive technical changes have occurred. The changes have been both physical and technical. However, some people still prefer the vintage guitars over modern guitars, and people believe that old guitars sound better than new once.

Why Are Guitars Shaped?

People have various forms and come in different sizes, and so are guitars, and they need to have a shape that is comfortable when playing. Forearm, belly cutouts, or cutaways on guitars are there for comfort and ease the playability in an electric guitar, the waist of a conventionally shaped guitar body is, meant to allow the guitar to comfortably sit in a playing position when the player is seated.  Generally, the form and shape of the guitar make it seem fresh and attractive. Another reason why the guitar comes in different ways is that different sizes and shapes of the cavities in the guitar body lead to varying characteristics – more or less treble, bass more volume levels.

Whenever two guitar players come together with top compare notes of their favorite instruments, the subject of the tonewood certainly comes up. Tonewood is simply the woods used in making the guitar, and they are carefully selected to get the sound that the manufacturer wants.

Certain wood species are considered desirable for necks, guitar bodies, fingerboards, and tops. Most guitar players have preference and prejudice when it comes to woods. For example, the guide made from Alder kis okay but only for starts and telecasters.  You can also get a guitar made from a combination of wood like the mahogany and maple cap.  The wood type dramatically determines the quality of sound output and tone variation.

Yes, different guitar shapes produce different sounds; this is one of the essential things to remember when intending to purchase or learn to play the guitar.  The type of wood used to make the guitar also determines the tunes and tone of your guitar.

The guitar is a unique instrument capable of producing different tunes besides the fact that many people tend to think that they provide the same type of sound just by their overall look. The guitar structure also affects how a guitar sounds. Some guitars naturally deliver more high frequencies than others. Different types of guitars, as seen sound different, the sound of the guitar is affected by the shape, technology used when making, and the material.

Who Created The First Guitar?

The traditional guitar was constructed from wood and strung with their gut, steel strings, or nylon. The first electric guitar invention was in the 1930s.  The first patent for the electrical guitar award went to George Beauchamp for a guitar he made with his assistant Adolph Rickenbacker in 1931; this makes them the official first electric guitar creators.

What Size Guitar Does Ed Sheeran Use?

Edward Christopher Sheeran is an English singer, actor, record producer, and famous songwriter. He is known for writing fantastic songs and his great magical fingers to play the guitar. Ed Sheeran isn’t just a big music start; he is also one of the most influential guitar players.  He plays using the ¾ -sized guitar and loop pedals, a setup which is known as Ed’s magical formula.

His guitar type typically has a combination of tuning tonewoods like the spruce and solid Sitka. The pedal allows Ed too, overdub, record, and playback on any of the four coordinated loops, separately of which has its output enabling him to play vocals and play the guitar.

What Are The Three Types Of Guitars?

There are three main types of guitar bass, electric and acoustic. But there are some essential variations within those groups that some people classify different types of guitar entirely. The acoustic guitar is the most common and familiar among many people. It has hollow bodies that amplify the sound of the strings. They are usually wooden and have six lines.

The electric, unlike the acoustic one they have a solid body, and as such, they tend to produce tiny sound unless you plug in an amplifier. If you want to play an electric guitar, your electric guitar, you will need an amp. The bass guitars have four, and they’re big thick, string that produces a big, lush sound.

What Strings Does Ed Sheeran Use?

Ed Sheeran debut came t upon the release of his first commercial single, which was quite famous and showcased his guitar skills. People since then have been quite interested in the performance and the type of guitar this music start plays due to his outstanding performance. Ed Sheeran has found the kind of guitar that best works for him and has stuck with it throughout his music.

A according to Ed Sheeran guitar tech, Sheeran only uses Elixir Acoustic Nanoweb light 12-53 strings; he also used Dunlop trigger capo on some of his songs. The guitar also features a 25.25 ¼ scale length neck; this is considerably more than the 23’’ scale length(the distance from the nut of the guitar to the bridge saddle.) neck that Ed Sheeran uses.

Why Are Old Guitars Better?

There’s something about old guitars that makes most players and collectors genuinely appreciate them.  Old guitars can be a remarkable asset to any guitarist, although they may be having some disadvantages. Defining the age of a guitar can be hard. Old is gold, and this applies even to guitars. Vintage guitars tend to be very pretty and look cool; this can make it feel magical when playing, especially if you play a signature one.

Generally, many vintage guitars are made of the best wood quality and the hardware that wa available then, and many of them are handmade and careful attention, something that isn’t quite common in most modern guitars. The older the guitar, the more aged the wood, theirs is no way one can make the wood of a guitar age; hence an old guitar is said to produce a mature experienced tone.

Is Pine Good For Guitar Bodies?

Pine is one of the best tonewoods. It has the best resonance and the best vibrations form the string. Pine is a very close relative to cedar and source, which commonly used on acoustic musical instruments for years. For most guitar bodies, however, they prefer to use the hard and soft maple. The maple is more natural to finish, and very robust types get used.

It, however, depends on what you intend to play and the quality of sound. Most wood is okay for the guitar, but what to keep in mind is the music output you expect to achieve; for example, basswood is soft easily, damaged with an extra bass punch, black Corina is like the mahogany a little heavy sound. The pinewood is, however, good for the guitar body but doesn’t perform well as a tuned wood.

The sound output of a guitar is usually affected by its physical make that is the shape and the type of wood used in making the instrument. The body of a guitar wood made; however, the type of wood used varies. A guitar body can either be from Pine, maple, etc., the kind of timber used affects the tone of the guitar when playing; different wood species have distinguishable sound characteristics that significantly affect the effect the tone, especially with the electric guitars. The acoustic guitars tune, however, is mainly affected due to the different wood type densities.  Wood type is quite a sensitive factor since even with the violin the body plays a significant role,

Bottom line the guitar sound is entirely dependent on its external factors that are the shape and type of material made. The wood used in making these instruments plays a massive role in determining the sound out and the tone. Most people usually think the shape of the guitar should make it look cool and fancy, Yes, it does, but in the end, it plays a vital role in determining the type of tone, sound, and vibrations produced.