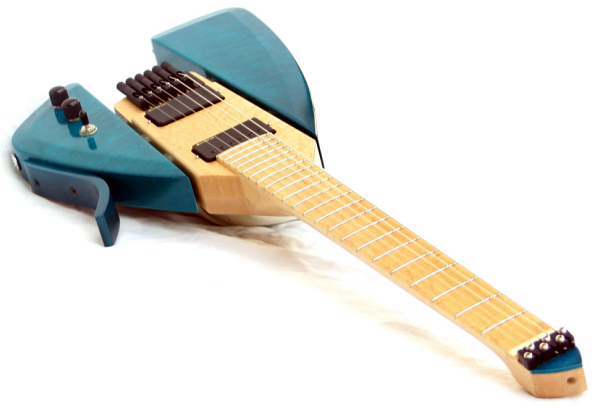 When you think of guitars, the first thing that comes to mind is probably the traditional acoustic or electric guitar with a headstock. But what about headless guitars? What is the point of them? This article will discuss the benefits of headless guitars and why more and more musicians are choosing to play them

A headless guitar is an electric guitar that does not have a headstock. This means that the tuning pegs are located in the guitar’s body instead of at the end of the neck. The strings can go straight from the bridge. This allows for more string tension and thus better sustain/tone compared with other guitars that have their tuning keys placed at the headstock.

Why a Headless guitar?

The first reason headless guitars are becoming more popular is their weight.

Even though most models come in at around three pounds, some can weigh as little as one pound! That’s less than half the weight of most electric guitars with headstocks.

So if you want something that feels a lot lighter on your back while playing live gigs or practicing long hours at home, then this might be perfect for what you need.

We all know how heavy those metal axes are to carry around – it’s like having another person strapped onto our backs when we walk out on stage with them.

A headless guitar helps alleviate some of that tension, so we don’t feel like Atlas carrying the world on his shoulders every time he goes out and plays music in front of people, and let me tell ya: it makes ALL THE DIFFERENCE.

Many people also find that headless guitars are easier to play because there is less neck tension.

This is due to the fact that there is no headstock pulling down on the strings at one end, which can cause problems with tuning and intonation. So for beginners or players with smaller hands, this could be a major plus when choosing a new instrument.

Another benefit of headless guitars is their ability to be more compact.

Because there’s no need for a large wooden piece attached to the end of the neck, these instruments can easily fit into smaller cases or even carry-on luggage.

So if you’re planning on traveling with your instrument (or want something that takes up less space at home), this might be worth considering when choosing what type of guitar will work best for you.

They also make great touring guitars because they don’t have extra parts like tuners and knobs sticking out from the body, which could get damaged while transported around in an airplane cargo hold or car trunk. Plus, most airlines allow you to bring a guitar on board as a carry-on item without having to pay any extra fees.

One of the coolest things about headless guitars is that they open up a world of new creative possibilities for players.

Since there’s no headstock to restrict what you can do with the design or shape of the instrument, you have a lot more freedom when it comes to creating something truly unique. This could be anything from adding extra frets or strings to making the entire body out of wood, metal, or even plastic!

So if you want to experiment with some new sounds and styles, then a headless guitar might be just what you need to take your playing to the next level.

A headless guitar benefits include better sustain due to the fact that there is no neck on these guitars. This means all of your strings are in a straight line from one end of the body till they reach where it meets up with another string at its starting point (the nut).

This also makes for less friction as you move between notes because there’s no need to worry about any bends or twists to get from here to there – just put down some pressure and strum away!

And since this type of instrument doesn’t have an actual fretted fingerboard like many others do, playing chords becomes easier because it takes less effort when moving around different positions on each fret wire.

One of the coolest things about headless guitars are completely customizable.

Since there’s no headstock to restrict what you can do with the design or shape of the instrument, you have a lot more freedom when it comes to creating something truly unique. This could be anything from adding extra frets or strings to making the entire body out of wood, metal, or even plastic!

So if you want to experiment with some new sounds and styles, then a headless guitar might be just what you need to take your playing to the next level.

A headless guitar also benefits in the area of tuning.

This is due to the fact that, because of its design, there is no tension on the neck as you tune it up. This means that your strings will stay in tune longer, and you won’t have to keep returning them every time you play.

And if you’re one of those guitarists who like to switch between different tunings often, then a headless model could be a real lifesaver!

Headless guitars are often chosen by guitarists who play metal or hard rock because they provide a more stable tuning and better tone when compared to traditional acoustic or electric guitars.

There are a few downsides to headless guitars that you should know before making your purchase.

Some people claim that headless guitars are easier to play than traditional acoustic or electric models. This is because there’s no need to worry about finding the right position for your left hand on the neck, which can be a bit tricky at first.

However, other players say that it takes more effort to properly play a headless guitar since the strings are positioned in reverse order (compared to a normal guitar).

So it depends on your personal experience and skill level when deciding whether or not this type of instrument is right for you.

Headless guitars can be very comfortable to play, depending on your preferences and what type of music you like listening to.

Many players find them easier on their backs because they don’t have a big neck sticking out in front of them while playing standing up. And some say that having no frets makes it much more natural-feeling when moving from one note or chord position to another.

It’s a myth that all guitarists hate playing headless models. Many players prefer them over traditional acoustic or electric instruments because they find it easier to play, and there’s less neck tension when tuning up before gigs!

However, some people dislike the sound produced by these guitars due to their lack of frets (which results in less sustain). And others think they look ugly without any decoration on their necks.

How do you tune a headless guitar?

You can tune a headless guitar just like any other instrument. All you need to do is use an electronic tuner or listen closely and adjust accordingly until each string sounds right at its intended pitch level.

It’s important not to over-tighten the strings, though – otherwise, they might break! If this happens, replace them with new ones of similar gauge thickness from your local music shop before continuing on your way.

How much does a headless guitar cost?

The price of headless guitars varies depending on brand and model, but most are priced between $500-$1000 (or around £300-£600). Some companies also offer custom-made options for those who aren’t happy with the standard range of models available.

So if you’re thinking of buying a headless guitar, be prepared to spend a bit more than you would on a traditional acoustic or electric model.

How do you maintain a headless guitar?

To keep your headless guitar in good condition, it’s important that you clean and oils its neck periodically.

You can wipe down the guitar’s body with a cloth dampened in warm water if necessary, but don’t get any liquid on its electronics as this could cause short-circuiting! And never use solvents such as alcohol or acetone to clean any part of an electric instrument because they may damage some components irreversibly.

Do not attempt to remove rust from metal parts by scraping them off with anything other than fine sandpaper – coarse grit may scratch up other areas too much when removing rust spots. It is best left to a professional guitar technician if this repair is needed.

So, there you have it – everything you need to know about headless guitars! Whether you’re a beginner or an experienced player, hopefully, this article has given you a good overview of what they are and why some people might choose to use them instead of traditional acoustic or electric models.